A character analysis essay is a popular school assignment, but it is often used in college as well. Character analysis is a great way to elicit core messages present in a book, play, or film by looking closer at characters' motivations, aspirations, fears, growth, interactions with other characters, etc. Besides being just another paper you have to write, character analysis teaches you a valuable life skill of looking at things from someone else's perspective and understanding people around you better.

Sounds interesting, right? This post will teach you how to write a character analysis essay, suggest some characters to analyze, and give a sample template to help you navigate the entire process.

Now, if you think, "I am too busy leaving my life and enjoying books and movies. I hate to write my papers!" then boy, have we a solution for you as well!

Just tell us whom you need to analyze. Our writers will prepare an in-depth evaluation of any character from any existing work of fiction in this Universe.

What Is a Character Analysis Essay?

A character analysis essay is an academic assignment where you have to evaluate the character's traits, behaviors, and place in the story to understand the entire story and its moral messages more fully. On par with rhetoric analysis, character analysis is an essential tool for studying literature, theater, and film.

Unlike people in real life, characters in books and movies are created deliberately to represent the author's idea about society or human nature. Character analysis helps to bring this meaning to the surface.

You can also analyze how author regards their characters. By noticing how the author refers to them, in what terms he or she describes them, you can assume whether or not the author approves of their actions, sympathizes with them, etc.

For example, the main character of the book is called a protagonist, while their opponent or challenger is called an antagonist. However, an antagonist isn't always "the bad one," and the protagonist isn't always "the good one." Sometimes, an author makes their protagonist an antihero – a flawed character who does wrong things or even is a straight-out villain. For example, Shakespeare's Macbeth, Heathcliff from Wuthering Heights, Alex from A Clockwork Orange, Scarlett from Gone with the Wind, Humbert Humbert from Nabokov's Lolita, Grenouille from Perfume: The Story of a Murderer, and so on. Understanding this context is crucial for character analysis.

How to Write a Character Analysis Essay Step by Step

Before you start writing a character analysis essay, follow these essential steps:

For character analysis, it's better to choose a complex and ambiguous or dynamic hero with a character arc. Someone who is only good, cartoonishly bad, reduced to a stereotype, or is a supporting character with few lines will not supply you with enough material for a good character analysis essay.

Re-read the book (or re-watch the film) keeping your character in mind, even when they are not described directly in a scene. Make notes and bookmarks, write down some key phrases describing your character or said by them.

First, elicit from the text external characteristics, such as appearance, age, gender, social class, and race (if relevant). Then, choose 3 to 5 adjectives that best describe the character's traits, for example, loyal, honest, wise or innocent, curious, passionate. They will be the basis for your body paragraphs. Think about whether these characteristics change in the course of the story. How?

What does your character need or desire? In musicals, they even have a particular number – an "I Want" song, where a protagonist shares a dream or most profound need. If the book (or a movie) were a musical, what would your character sing about? Friendship, love, power, freedom, or success and recognition?

Conflicts can be represented by confrontation with other characters (protagonist vs. antagonist), overcoming obstacles (imprisonment, illness, poverty, ostracism) or internal struggles, like a conflict between love and duty.

6. Is there a shift in the character's views?

Sometimes the shift is sudden and comes as an epiphany – a realization that dawns on a character and gives them the means of resolving their conflicts. Sometimes, it's a gradual transformation – a so-called character arc.

7. From this change (or lack of it) elicit the moral message of this character

Each character was created with a purpose. Examine this purpose and identify the moral message that the character's journey embodies. For example:

You don't necessarily have to agree with this message, but you must know how to draw it out from the text.

Depending on the length of your essay or the complexity of your character, your essay will typically consist of 5 to 7 paragraphs and be 800 to 1500 words long. Here is a rough outline that will help you:

Each body paragraph should have a clear topic sentence. For a shorter essay, organize paragraphs by specific traits you are going to discuss. It is important to discriminate between meaningful characteristics and features added to flesh out the character and make it more lifelike and believable. Not every detail is equally significant in the story.

Three key characteristics form three body paragraphs. For each body paragraph, use at least one relevant quotation. However, don't over-quote; choose the most illustrative examples. Cite the quotes properly adhering to MLA guidelines (if your instructor hasn't specified otherwise) and anchor quotations to the text with your own words.

Alternatively, for a more extended essay and more complex topic, you can follow this plan:

If you don't know how to start brainstorming your topics, here are a few suggestions:

Need More Help? Don't Hesitate to Ask! Personalized topic suggestions, samples, editing, and proofreading – we can assist with anything. 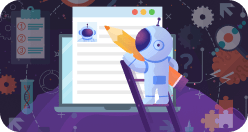